I was recently asked to answer a question on Quora about startups and stability, and as I read some of the other replies I noticed a trend. The question was basically “Would joining a startup be a mistake for someone with the goals of stability and career progression?”. The questioner then defined stability as being able to support a family and have nice things (financial stability).

The answers ranged from a flat-out “Yes” (i.e. “it’s a mistake“) to “startups provide no stability/career progression“, while another pointed out that most startups fail. The responses were familiar, and similar to objections I’ve received when pitching startups to software engineers over the past fifteen plus years.

Before answering, I considered the many I know who spent most of their careers at startups and small companies in comparison to the people who worked for larger shops. Have the ones that stuck with startups achieved less (or more) stability and/or career progression?

Let’s consider Candidate A who has worked for ten years at one large company, most would say that shows job and career stability. After that length of time, we might assume (or hope for) some level of financial stability and at least a small increase in responsibility that could classify as career progression.

When presented Candidate B with experience at five startups over a ten year span, most conclude this demonstrates career instability or even “job hopping”. Without seeing job titles or any duties and accomplishments, it would be difficult to make any guesses about career progression, but many would assume that a series of relatively short stints might not allow for much forward movement.

Candidate A clearly has more career stability using traditional measures. However, Candidate B’s experience, at least in the tech world, is the somewhat new normal. Job security and career stability (marked by few job changes) is what professionals may have strived for historically, but now one could argue that employability is a much more important concept and goal to focus on.

Today, Candidate A’s company announced layoffs and Candidate B’s startup ran out of money. Who lands a job first? Who is more employable?

When job seekers voice concern about the stability of some software startup I’m pitching, I may cede that most startups will fail and the conversation may end there. I might even throw in a “Startups are risky“. These candidates are more concerned about job stability (the keeping of one job) than career stability (the ability to consistently have a job).

The fear is that a company will fail, and the candidate would then be a job seeker all over again with some frictional unemployment and the possibility of worse. Given the failure rate of startups, the fear of a company closing is rational. The fear of any sustained unemployment, at least for many startup veterans, probably is not.

Anecdotally, most of the people I know who gravitated towards small/new firms had little or no unemployment, and most appear to have at least the same levels of financial stability and career progression to those at larger firms. The only visible difference is usually that startup veterans had more companies listed on résumés, may have worked for and with some of the same people at different jobs, and some have a wider palette of technical skills. It’s reminiscent of a successful independent contractor’s background. 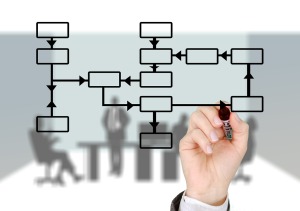 After the first startup boom/bust some in the industry tied company stability to career stability or employability, as if being associated with a failed startup might negatively impact future employment options. Many discovered the opposite was true, as those who failed were tagged startup veterans unlikely to repeat the same mistakes twice.

I would expect that those who have worked for multiple startups would likely tell outsiders this: “Once you’re in, you’re in“. Let me explain.

While any individual startup may not provide job stability, an ecosystem of startups will provide candidates with career stability and usually increased employability.

When startups hire, most seek those with previous startup experience. It’s usually right there in the job descriptions. Remember Candidates A and B from earlier? Candidate A hopefully has a shot at a startup job, but B already has an interview.

Due to the transient nature of startup employment and the trend of startup employees to stay within the startup ecosystem, the ability for those in the startup community to get introduced to new jobs via one’s network increases dramatically. When Startup X fails, the 50 employees migrate to perhaps 3o other startups. That gives Startup X alumni a host of employment possibilities, which should grow exponentially as additional startups rise and fall over time. In smaller cities one can become a known entity within the startup community, virtually guaranteeing employment for as long as startups exist and their reputation remains positive.

The concept of career stability has changed significantly as increased job movement has become an accepted industry characteristic. When one expects a higher number of job searches over the course of a career, proactive professionals will consider employability and marketability more carefully. Job security ≠ career security. If your main concern is being continuously employed at rising compensation levels, employability will often trump job security.