I was recently asked a question on Reddit about a specific contract-to-hire (C2H) scenario that I hadn’t given much thought to recently. With the prevalence of C2H (sometimes called ‘try before you buy’ in the recruiting world) in the market today, I thought the topic was worthy of full exploration.

For those unfamiliar, contract-to-hire is where a company brings on a resource as a contractor with some level of understanding that there is either an intent or at least a possibility that the resource will be converted to a full-time (aka “permanent”) employee after some contract duration. During the contract period, the resource is often employed by some third-party agency who negotiates the rates.

The Numbers and Terminology

If $COMPANY wants to bring on $DEVELOPER on a six month contract-to-hire basis, $COMPANY might agree to pay $AGENCY $100 for each hour of service. $AGENCY and $DEVELOPER have agreed to a pay rate of $80/hr, so the $AGENCY gets $20/hr for each hour $DEVELOPER works.

$COMPANY and $AGENCY may have also negotiated some type of buy-out clause, where at the end of the six months if $COMPANY wants to hire $DEVELOPER there will be a placement fee equal to n% of $DEVELOPER’s salary. Sometimes there is no fee involved in the hire, as the agency is considered paid because of their margin over the six-month contract. Other times the placement fee will vary based on the tenure of the contractor, where the buyout might be n% between days 1-60, n-5% between days 60-90, and n-10% days between days 90-180, and no fee at all after 180 days.

Why Are Details Important?

As one example, suppose the agency is getting paid as outlined in the example above, but the agency receives no buyout upon hire. What would be the incentives for the agency? Obviously, the agency would rather have the developer remain as a contractor for as long as possible without ever converting. The agency is getting $20K for every six month period worked, but that turns into nothing when the hire is made.

Let’s look at a second example where the agency has a buyout clause with a prorated element, where the buyout amount is reduced over time as outlined above. What are the incentives there for the agency? There is some math involved (feel free to program a solution in the comments!), but the agency could look at the numbers to see when the optimum conversion time would be, and the agency would have some incentive to make that conversion happen within a certain range of dates. If we really get into the numbers, we could probably point to an exact hour where the developer’s conversion is in the best financial interest of the agency.

Who Have We Left Out?

We’ve explored the incentives of the agency without even considering the incentives of the developer. In C2H situations, there can be a wide range of incentives for the developer, many based on their own personal situation. Since the hiring company will usually provide the developer with several additional benefits upon full hire (insurances, retirement, paid time off), there is also some tricky math involved with figuring out the value of a perm hire compensation package when compared to the hourly rate.

Often contractors are paid a rate above what they would generally make as a perm hire, so we may see situations where the contractor tries to delay converting in order to maximize earnings. This could be in direct conflict with the agency’s financial incentives if a buyout is involved. As you can imagine, things can get rather interesting when the contractor has an incentive to remain a contractor and the agency does not. When analyzing bad recruiter behavior we need to consider misaligned incentives as a root cause.

An agency is trying to maximize their take, and we’ve established that the agency’s earnings are Bill Rate – Pay Rate. The agency has two incentives to increase margins – they first go to the hiring company and try to negotiate the highest Bill Rate possible, and then they go to the developer to negotiate a Pay Rate as low as possible. This model is vastly different to the recruiter/developer relationship dynamic in permanent hire recruiting scenarios (or even during a buyout in a C2H situation), where the recruiter has an incentive to maximize the developer’s compensation (because fee = n% of salary).

Sometimes a contractor will ask for a raise during the contract period. The agency will almost always object to this unless they are making a solid margin already. Unfortunately, the only party that is typically aware of all three numbers (bill rate, pay rate, margin) is the agency itself. The company rarely knows pay rate, and the developer is usually unaware of bill rate. That lack of transparency is in the best interest of the agency, which is why they will try to control access to these numbers. 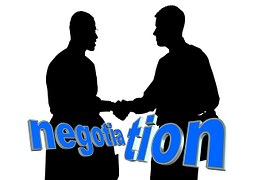 We need to first keep in mind that in hourly contract negotiations, small numbers can add up. $1 an hour might convert to about $2K per year, and that figure translates to both the developer’s compensation as well as the agency’s revenues.

In most cases, the C2H developer won’t have a salary number defined for their conversion. They have accepted a temporary contract rate, but will need to negotiate their salary when the time comes. This can be problematic, as the developer doesn’t usually have much power in the negotiation. They may already have some level of attachment to the job and their co-workers, and the thought of another job search might be daunting. When you combine these with the fact that the developer probably does not have another job offer to leverage, it can make these negotiations more complex.

To protect your best interests, gather as much information as possible from the agency and the employer. Ask about the agency’s arrangement with the employer when it comes to conversion and buyout clauses, and try to learn about what you might expect to see in a perm hire offer.